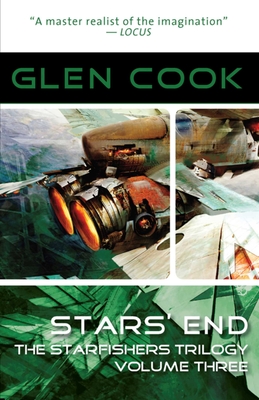 At the edge of the galaxy lies the fortress known as Stars’ End, a mysterious planet bristling with deadly automated weapons systems, programmed to slaughter anyone fool enough to come within range. But who built this strange planet of death, placing it within view of the Milky Way’s great lens… and tantalizingly close to the hydrogen-filled feeding grounds of the interstellar dragons known as Starfish and the priceless ambergris they create?

Should the harvestships of the High Seiners, known as Starfishers, gain control of that arsenal, they need never fear the Confederation’s navy nor the armies of the human-like Sangaree again. But intelligent life everywhere now needs the might of Stars’ End—and the expertise of agents Mouse Storm and Moyshe benRabi. For in the midst of the Sangaree wars, a far more sinister enemy approaches, coming from the depths of the galaxy, in hordes larger than a solar system.