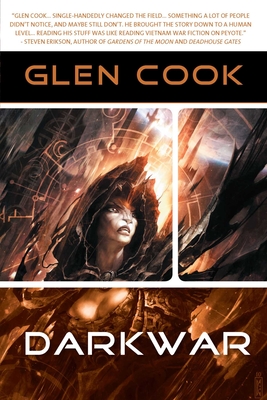 The world grows colder with each passing year, the longer winters and ever-deepening snows awaking ancient fears within the Dengan Packstead, fears of invasion by armed and desperate nomads, attack by the witchlike and mysterious Silth, able to kill with their minds alone, and of the Grauken, that desperate time when intellect gives way to buried cannibalistic instinct, when meth feeds upon meth. For Marika, a young pup of the Packstead, loyal to pack and family, times are dark indeed, for against these foes, the Packstead cannot prevail. But awakening within Marika is a power unmatched in all the world, a legendary power that may not just save her world, but allow her to grasp the stars themselves.
From Glen Cook, author of the Black Company and Dread Empire novels, comes Darkwar, collecting for the first time, the stunning science fantasy epic that originally appeared as Doomstalker, Warlock, and Ceremony.