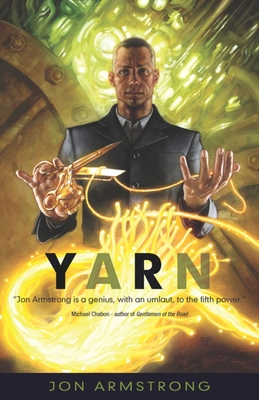 From the neo-feudalistic slubs, the corn-filled world of Tane's youth, to his apprenticeship among the deadly saleswarriors of Seattlehama--the sex-and-shopping capital of the world--to the horrors of a polluted Antarctica, Yarn tells a stylish tale of love, deceit, and memory.

Tane Cedar is the master tailor, the supreme outfitter of the wealthy, the beautiful, and the powerful. When an ex-lover, on the run from the authorities, asks him to create a garment from the dangerous and illegal Xi yarn--a psychedelic opiate--to ease her final hours, Tane's world is torn apart.

Armed with just his yarn pulls, scissors, Mini-Air-Juki handheld sewing machine, and his wits, Tane journeys through the shadowy underworld where he must untangle the deadly
mysteries and machinations of decades of deceit.

Following up on his highly acclaimed and Philip K. Dick Award-nominated "fashionpunk" novel Grey, Jon Armstrong explodes back on the scene with Yarn.

Jon Armstrong is the author of the critically acclaimed “fashionpunk” novel Grey. The son of parents trained in the Arts, he was raised in the shadow of Modernism and misspelled his way through school. In college, he spent a formative year in Japan. That neon/noisy culture forms the roots of the world in his novels. After college, he traveled the world as a by-product of stints at travel agencies and an airline, studied fashion design, did stand-up comedy, worked as a temp doing graphic arts, and (still to this day) designs web sites. Jon lives with his wife and daughter in New York City. He is currently working on the third book in the Grey/Yarn series as well as the golf swing of the future.
Loading...
or
Not Currently Available for Direct Purchase