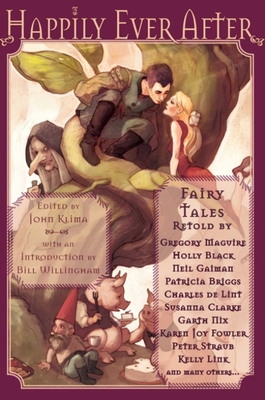 ...in the faraway land of Story, a Hugo-winning Editor realized that no one had collected together the fairy tales of the age, and that doorstopthick anthologies of modern fairy tales were sorely lacking...

And so the Editor ventured forth, wandering the land of Story from shore to shore, climbing massive mountains of books and delving deep into lush, literary forests, gathering together thirty-three of the best re-tellings of fairy tales he could find. Not just any fairy tales, mind you, but tantalizing tales from some of the biggest names in today’s fantastic fiction, authors like Gregory Maguire, Susanna Clarke, Charles de Lint, Holly Black, Alethea Kontis, Kelly Link, Neil Gaiman, Patricia Briggs, Paul Di Filippo, Gregory Frost, and Nancy Kress. But these stories alone weren’t enough to satisfy the Editor, so the Editor ventured further, into the dangerous cave of the fearsome Bill Willingham, and emerged intact with a magnificent introduction, to tie the collection together.

And the inhabitants of Story—from the Kings and Queens relaxing in their castles to the peasants toiling in the fields, from the fey folk flitting about the forests to the trolls lurking under bridges and the giants in the hills—read the anthology, and enjoyed it. And they all lived...