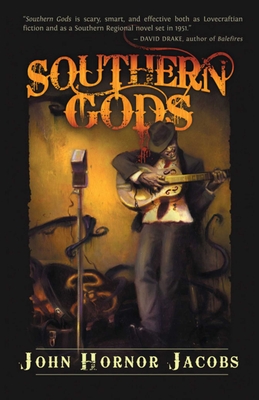 Nominated for the Bram Stoker Award for Superior Achievement in a First Novel
Recent World War II veteran Bull Ingram is working as muscle when a Memphis DJ hires him to find Ramblin' John Hastur. The mysterious blues man's dark, driving music - broadcast at ever-shifting frequencies by a phantom radio station - is said to make living men insane and dead men rise. Disturbed and enraged by the bootleg recording the DJ plays for him, Ingram follows Hastur's trail into the strange, uncivilized backwoods of Arkansas, where he hears rumors the musician has sold his soul to the Devil. But as Ingram closes in on Hastur and those who have crossed his path, he'll learn there are forces much more malevolent than the Devil and reckonings more painful than Hell... In a masterful debut of Lovecraftian horror and Southern gothic menace, John Hornor Jacobs reveals the fragility of free will, the dangerous power of sacrifice, and the insidious strength of blood.