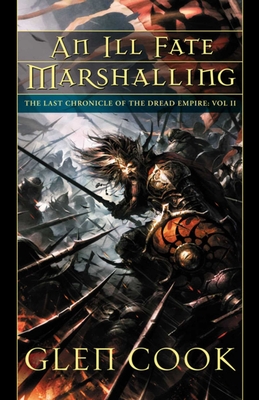 The Last Chronicle of the Dread Empire: Volume Two

King Bragi Ragnorson decides to join Chatelain Mist’s coup against the Dread Empire. Varhlokkur — the King’s wizard — tries to dissuade Ragnorson from this chosen path, but only the drum-beat of war is heard. The King’s Spymaster Michael Trebilcock joins with the wizard to stave off The Ill Fate Marshaling, to no effect.
Many of the characters from past volumes take center stage, and the climatic events of this book shake the world of the Dread Empire to its very core, creating A Path to Coldness of Heart. Glen Cook’s final Dread Empire novel was to have been published 20 years ago, but the manuscript was stolen, and the fate of The Dread Empire has been in Limbo — until now! Night Shade is proud to present the long delayed final Dread Empire Trilogy, of which An Ill Fate Marshaling is Volume 2.