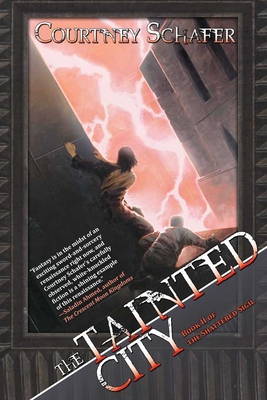 Dev is a desperate man. After narrowly surviving a smuggling job gone wrong, he’s now a prisoner of the Alathian Council, held hostage to ensure his friend Kiran — former apprentice to one of the most ruthless mages alive — does their bidding.

But Kiran isn’t Dev’s only concern. Back in his home city of Ninavel, the child he once swore to protect faces a terrible fate if he can’t reach her in time, and the days are fast slipping away. So when the Council offers Dev freedom in exchange for his and Kiran’s assistance in a clandestine mission to Ninavel, he can’t refuse, no matter how much he distrusts their motives.

Once in Ninavel the mission proves more treacherous than even Dev could have imagined. Betrayed by allies, forced to aid their enemies, he and Kiran must confront the darkest truths of their pasts if they hope to save those they love and survive their return to the Tainted City.

After college she moved to the climber’s paradise of Boulder, Colorado, and somehow managed to get a masters degree in electrical engineering from the University of Colorado in between racking up ski days and peak climbs. She now works in the aerospace industry and is married to an Australian scientist who shares her love for speculative fiction and mountain climbing. She’s had to slow down a little on the adrenaline sports since the birth of her son, but only until he’s old enough to join in. She writes every spare moment she's not working or adventuring with her family.
Loading...
or
Not Currently Available for Direct Purchase