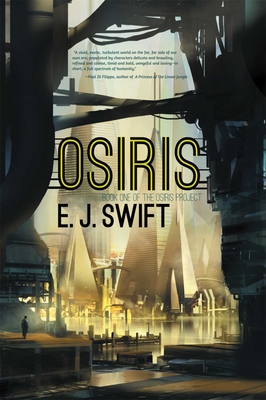 Book One of the Osiris Project

“Nobody leaves Osiris. Osiris is a lost city. She has lost the world and world has lost her . . .”

Rising high above the frigid waters, the ocean city of Osiris has been cut off from the land since the Great Storm 50 years ago. Most believe that Osiris is the last city on Earth. Adelaide is the black-sheep granddaughter of the city’s Architect. A jaded socialite, she wants little to do with her powerful relatives — until her troubled twin brother disappears mysteriously. Vikram, a third-generation storm refugee, sees his own people dying of cold and starvation. He hopes to use Adelaide to bring about much-needed reforms — but who is using whom? As another brutal winter brings Osiris closer to riot and revolution, two very different people attempt to bridge the gap dividing the city, only to find a future far more complicated than either of them ever imagined.

E. J. Swift is an English author of science fiction and magical realism. Osiris is her first novel and the first in a planned trilogy. Her short fiction is featured in the January 2012 edition of UK magazine Interzone. Emma studied English and American Literature at the University of Manchester and later completed the MA in Creative Writing program at Royal Holloway, University of London. Between studies she has lived and worked in Paris, and is now based back in London. Emma also works at the Conservatoire for Dance and Drama, an affiliation of eight specialist dance, drama and circus schools. She takes time out from writing and the day job exploring circus skills such as trapeze and hula hooping.
Loading...
or
Not Currently Available for Direct Purchase