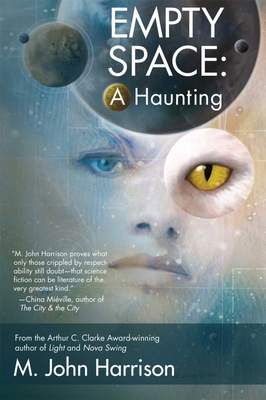 One of science fiction’s premiere stylists, M. John Harrison has received abundant praise and awards for his wildly imaginative ideas and transcendent prose. Now he returns to the richly complex universe of Light and Nova Swing with a stunning new novel that braids three glittering strands into a tapestry that spans vast reaches of time and space.

In the near future, an elderly English widow is stirred from her mundane existence by surreal omens and visitations. Centuries later, the space freighter Nova Swing takes on an illegal alien artifact as cargo, with consequences beyond reckoning. While on a distant planet, a nameless policewoman tries to bring order to an event zone where ordinary physics do not apply, only to find herself caught up in something even stranger and more sublime. . . .

Michael John Harrison (born 26 July 1945), known primarily by his pen name M. John Harrison, is an English author and critic. His work includes the Viriconium sequence of novels and short stories, (1982), Climbers (1989), and the Kefahuchi Tract series which begins with Light (2002).
Loading...
or support indie stores by buying on