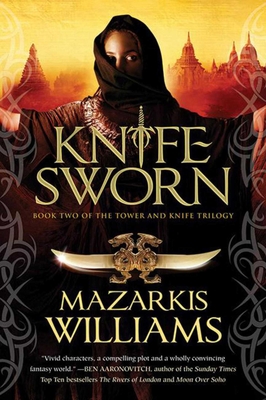 Book Two of the Tower and Knife Trilogy

The brother of a fallen emperor ascends to the throne of the Cerani Empire in the second installment of the Tower and Knife trilogy.

After a lifetime locked in his tower room, Sarmin has come into his own. He is the crowned emperor; he has wed Mesema of the horse tribes; the Pattern-Master is dead. Everything should be happy-ever-after.

But war ignites in the north, and in the palace, Sarmin’s new baby brother is seen as a threat to Mesema’s unborn child. Scheming courtiers surround the Petal Throne, and when a peace envoy is invited, their plots blossom. Sarmin has no royal assassin as proof against their treachery; no one to whom he can give the twisted Knife.

Those whom Sarmin saved from the Pattern-Master’s curse, unsure how to live without the Many, turn to Mogyrk, the god of their ancient foe, for comfort. And Sarmin has not been left alone: the remnants of the Many haunt his thoughts; he hears their voices in the darkness of his room. The worst damage left by the Pattern-Master is about to take Sarmin unawares . . .

Mazarkis Williams is a writer with roots in both the US and the UK, having worked in and been educated in both countries. He has degrees in history and physics. Knife Sworn is the second installment in the Tower and Knife trilogy. He splits his time between Boston, Massachusetts, and Bristol, England.

Praise For Knife Sworn: Book Two of the Tower and Knife Trilogy…

“Williams conjures a world with strong flavors of the early Ottoman Empire, medieval Persia, and Arabian legend. It makes for a rich and entertaining storytelling environment, and Williams creates a twisty and enjoyable tale. . . . Strongly recommended.” —SFX

“Williams conjures a world with strong flavors of the early Ottoman Empire, medieval Persia, and Arabian legend. It makes for a rich and entertaining storytelling environment, and Williams creates a twisty and enjoyable tale. . . . Strongly recommended.” —SFX
or
Not Currently Available for Direct Purchase
Copyright © 2020 American Booksellers Association