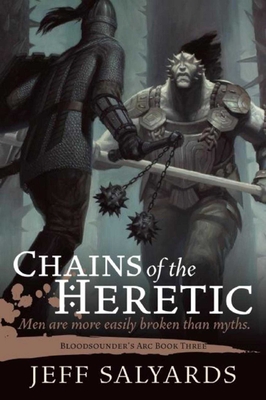 Chains of the Heretic

Emperor Cynead has usurped command of the Memoridons—Tower-controlled memory witches—and consolidated his reign over the Syldoonian Empire. After escaping the capital city of Sunwrack, Captain Braylar Killcoin and his Jackal company evade pursuit across Urglovia, tasked with reaching deposed emperor Thumaar and helping him recapture the throne. Braylar’s sister, Soffjian, rejoins the Jackals and reveals that Commander Darzaak promised her freedom if she agreed to aid them in breaking Cynead’s grip on the other Memoridons and ousting him.

Imperial forces attempt to intercept Braylar’s company before they can reach Thumaar. The Jackals fight through Cynead’s battalions but find themselves trapped along the Godveil. Outmaneuvered and outnumbered, Braylar gambles on some obscure passages that Arki has translated and uses his cursed flail, Bloodsounder, to part the Godveil, leading the Jackals to the other side. There, they encounter the ruins of human civilization, but they also learn that the Deserters who abandoned humanity a millennium ago and created the Veil in their wake are still very much alive. But are they gods? Demons? Monsters?

What Braylar, Soffjian, Arki, and the Jackals discover beyond the Godveil will shake an empire, reshape a map, and irrevocably alter the course of history.

Praise For Chains of the Heretic: Bloodsounder's Arc Book Three…

Praise for Chains of the Heretic

“To call Chains of the Heretic one of the finest pieces of dark fantasy I have ever read would be a gross understatement. It is simply phenomenal, an incredible masterpiece and outstanding achievement for Jeff Salyards.”
—The Bibliosanctum, 5/5

“If you haven’t read this book yet, you totally need to go out and buy it. Like now. . . . personal and epic and fantastic, all. It kind of blows my mind that this series was so good.”— Elitist Book Reviews, 5/5 Stars

Praise for Veil of the Deserters

“Veil of the Deserters is everything I was looking for in the highly anticipated follow-up to Scourge of the Betrayer. What Jeff Salyards has crafted here is a rare sequel that actually manages to outdo the first. . . . Paced exceptionally well throughout, it also has the kind of killer climax that manages to completely satisfy, while still leaving the reader desperate for more.”
—Beauty in Ruins

“Jeff Salyards creates a vibrant tapestry of betrayal, intrigue, and brotherhood. In Veil of the Deserters, conspirators weave plots within plots in a land where memory can be wielded like a weapon. Salyards’s characters are bold and complex as they clash upon the world’s stage. The magic is refreshingly innovative. This is one you don’t want to miss.”
—Jon Sprunk, author of the Shadow saga

“Mix a dash of Lord of the Rings and the Riyria Revelations with a pinch of the Broken Empire and you’ve got a taste of the Bloodsounder’s Arc. Dark, witty, and full of wonder, Salyards’s characters scream from the page.”
—Tim Marquitz, author of the Demon Squad series and Embers of an Age

“Veil of the Deserters builds upon the promise of Scourge of the Betrayer, continuing Salyards’s unique blend of gritty realism, brutal action, and thoughtful introspection even as the story deepens with a host of intriguing revelations. If you’ve any taste for military fantasy, read these books!”
—Courtney Schafer, author of The Whitefire Crossing and The Tainted City

“Jeff Salyards continues to impress with Veil of the Deserters, second in his Bloodsounder’s Arc, chronicling the adventures of Captain Braylar Killcoin and his company of soldiers. Told from the point of view of a young scribe, Veil of the Deserters gives us a believable and brutal world filled with believable and brutal characters, dark machinations, and political intrigue. A fast, fun read for fans of gritty, well-told fantasy.”
—Ken Scholes, author of the Psalms of Isaak series

“Veil of the Deserters is a gritty military fantasy with intriguing world building and grimly dark magic, as well as complex, interesting characters.”
—Martha Wells, author of the Books of the Raksura series

Praise for Scourge of the Betrayer

“Scourge of the Betrayer is as harsh and profane as anything Richard K. Morgan or Joe Abercrombie serves up. Fortunately, Salyards has the skills–and the humor–to pull it off. Snappy dialogue, political intrigue, shady characters, gripping action sequences, a poor guy that has no idea what he’s gotten himself into… Yeah, there’s a lot to like about this debut."
—David Anthony Durham, author of The Acacia Trilogy

“Scourge of the Betrayer is a fascinatingly lateral take on quest fantasy. The strangely flawed Captain Killcoin and the curiously naive scribe Arkamondos intersect in unusual and interesting ways as they deal with politics, combat and a peculiar costly form of magic. A gripping read, this is a fine opening to a series I'm looking forward to continuing to enjoy."
—Jay Lake, author of Mainspring and Green

“To call Chains of the Heretic one of the finest pieces of dark fantasy I have ever read would be a gross understatement. It is simply phenomenal, an incredible masterpiece and outstanding achievement for Jeff Salyards.”
—The Bibliosanctum, 5/5

Jeff Salyards grew up in a small town north of Chicago, where he honed his writing skills, leaning toward stories that were loud, chaotic, and full of irrepressible characters. While his tastes have grown a bit darker and more mature over the years, he’s never lost his fascination for the fantastic. By day he’s a book editor for the American Bar Association, but he writes his own novels by night. Salyards resides in Chicago with his wife and three daughters, and Chains of the Heretic is his third book.
Loading...
or
Not Currently Available for Direct Purchase