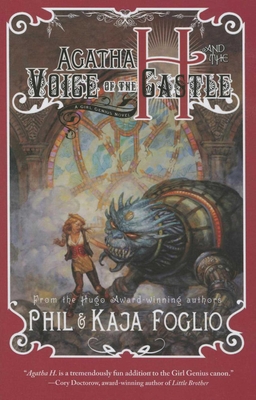 Agatha H. and the Voice of the Castle

In the third installment of the Girl Genius novels, Agatha H. and the Voice of the Castle begins as Agatha Heterodyne returns to her ancestral home, the warped little town of Mechanicsburg. There she must claim her inheritance by convincing the artificial intelligence that animates her family’s castle that she is, in fact, the new Heterodyne. But this apparently simple task is made complicated in several ways: An imposter claiming to be the legitimate heir appears. The Empire is convinced that Agatha is the person responsible for the Long War (and to be fair, they are not entirely incorrect). And, worst of all, the Castle itself is insane.

From the Hugo Award–winning Girl Genius online comics comes this third book in the Agatha H. trilogy; and just like the first two, Agatha H. and the Voice of the Castle will grab you from the first page and not let go!

Phil and Kaja Foglio are the co-creators of the Hugo, Eagle, and Eisner Award-nominated webcomic Girl Genius. The two have contributed artwork to the collectable card game Magic: The Gathering, and have collaborated on the gaming comic strip What’s New with Phil & Dixie.
Loading...
or support indie stores by buying on