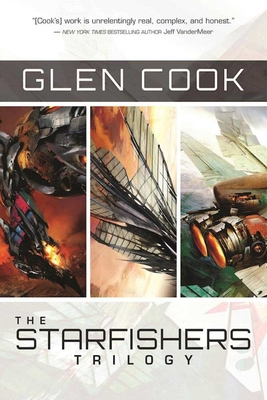 Centuries ago, a private army’s deadly strike freed human slaves from their cruel Sangaree masters. A single Sangaree alien survived—and swore vengeance on the Storm family and their soldiers. Generations later, his carefully mapped revenge scheme explodes as the armies of the galaxies collide along a strange burning planet’s Shadowline.

In the war’s deadly aftermath, Mouse Storm makes his way towards Stars’ End, a mysterious planet bristling with deadly automated weapons systems, programmed to slaughter anyone foolish enough to approach. Mouse and fellow Confederation agent Moyshe benRabi are pursuing Starfishers, Sangaree harvestships that protect the Starfish; creatures of pure fusion energy that produce the priceless ambergris that makes travel between the stars possible.

But who built Stars’ End, and why so close to the drifting Starfish? In the midst of the Sangaree wars, a far more sinister enemy approaches, coming from the depths of the galaxy, in hordes larger than a solar system.

Praise For The Starfishers Trilogy…

“A master realist of the imagination”
—Locus

“A master realist of the imagination”
—Locus

Glen Cook is the author of dozens of novels of fantasy and science fiction, including The Black Company series, The Garrett Files, and The Tyranny of the Night. Cook was born in 1944 in New York City. He attended the Clarion Writers Workshop in 1970, where he met his wife, Carol.
Loading...
or support indie stores by buying on