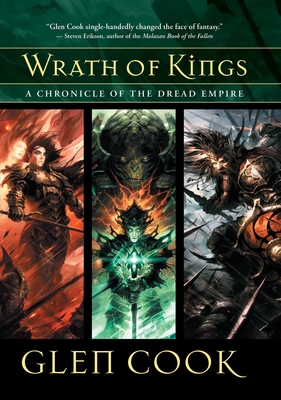 An omnibus edition of the final three Dread Empire novels (Reap the East Wind, An Ill Fate Marshalling, and A Path to Coldness of Heart) from a pioneer of gritty and realistic epic fantasy, Glen Cook.

The Dread Empire spans a continent: from the highest peaks of the Dragon’s Teeth to the endless desert lands of Hammad al Nakir; from besieged Kavelin to mighty Shinsan . . .

The time of the wrath of kings is close at hand. Bragi Ragnarson, now the king of Kavelin, has decided to join forces with Chatelain Mist, the exiled princess of Shinshan looking to usurp her throne. But in the deserts on the outskirts of the empire, a young victim of the Great Eastern Wars becomes the Deliverer of an eons-forgotten god, chosen to lead the legions of the dead.

Wrath of Kings collects the final Dread Empire trilogy into a single volume. This epic narrative had been put on hold when the original manuscript to the final volume was stolen. Glen returned to the Dread Empire twenty years later, completely rewriting the concluding novel, A Path to Coldness of Heart.

From the author of The Black Company comes an elaborate tale of nation-shattering conflict, maddening magic, strange creatures, and raw, flawed heroes, all shown through the filter of the author’s inimitable war-correspondent prose.

Glen Cook is the author of dozens of novels of fantasy and science fiction, including The Black Company series, The Garrett Files, and The Tyranny of the Night. Cook was born in 1944 in New York City. He attended the Clarion Writers Workshop in 1970, where he met his wife, Carol. He currently makes his home in St. Louis, Missouri.
Loading...
or
Not Currently Available for Direct Purchase