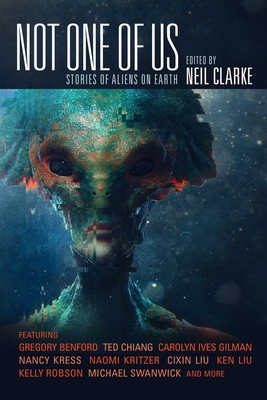 Not One of Us

Stories of Aliens on Earth

Mankind comes face to face with extraterrestrial life in this anthology from Clarkesworld publisher Neil Clarke. Here are stories that aren’t afraid to tackle thorny issues like race, immigration, nationalism, religion, and politics.

Science fiction writers have been using aliens as a metaphor for the other for over one hundred years. Superman has otherworldly origins, and his struggles to blend in on our planet are a clear metaphor for immigration. Earth’s adopted son is just one example of this “Alien Among Us” narrative.

There are stories of assimilation, or the failure to do so. Stories of resistance to the forces of naturalization. Stories told from the alien viewpoint. Stories that use aliens as a manifestation of the fears and worries of specific places and eras. Stories that transcend location and time, speaking to universal issues of group identity and its relationship to the Other. The table of contents includes:

These writers grapple both the best and worst aspects of human nature, and they do so in utterly compelling and entertaining ways.

Praise For Not One of Us: Stories of Aliens on Earth…

“Brings together some of the best voices writing in the genre today. . . . a stunning collection of short fiction.”
—WorldsInInk on Galactic Empires

“Readers should savor the stories a few at a time to get the most out of Clarke’s superior selections . . . but there are no inferior pieces here. This is a fine, thoughtful book.”—Publishers Weekly, starred review

Neil Clarke is the award-winning publisher and editor in chief of Clarkesworld magazine, winner of three Hugo Awards for Best Semiprozine. Night Shade Books publishes his annual The Best Science Fiction of the Year series, as well as a number of standalone themed anthologies including Galactic Empires, More Human than Human, and the Final Frontier.
Loading...
or
Not Currently Available for Direct Purchase