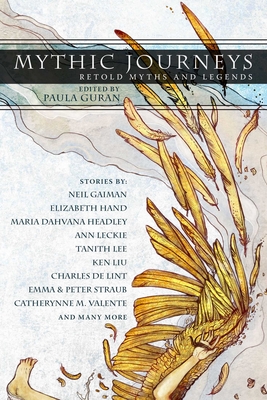 The Native American trickster Coyote . . . the snake-haired Greek Gorgon Medusa, whose gaze turned men to stone . . . Kaggen, creator of the San peoples of Africa . . . the Holy Grail of Arthurian legend . . . Freyja, the Norse goddess of love and beauty . . . Ys, the mythical sunken city once built on the coast of France . . . Ragnarok, the myth of a world destroyed and reborn . . . Jason and the Argonauts, sailing in search of the Golden Fleece . . .

Myths and legends are the oldest of stories, part of our collective consciousness, and the source from which all fiction flows. Full of magic, supernatural powers, monsters, heroes, epic journeys, strange worlds, and vast imagination, they are fantasies so compelling we want to believe them true.

This new anthology compiles some of the best modern short mythic retellings and reinvention of legend from award-winning and bestselling authors, acclaimed storytellers, and exciting new talent, offering readers new ways to interpret and understand the world. Adventure with us on these Mythic Journeys . Stories and authors include are:

“The stories are all excellent, and the variety of storytelling makes this a solid choice for fantasy and general readers alike.”—Booklist, starred review

“Fans of fables will find this a delightful exploration of the ways ancient stories can still captivate.”—Publishers Weekly

Paula Guran is a two-time Bram Stoker Award winner. In addition to scores of novels and several single-author collections, she has edited more than forty published anthologies, including Blood Sisters: Vampire Stories By Women and Beyond the Woods: Fairy Tales Retold, both with Night Shade Books. She lives in Akron, Ohio.
Loading...
or support indie stores by buying on