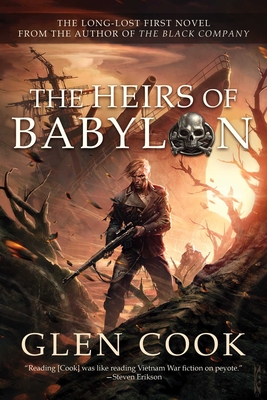 The Heirs of Babylon

The dystopian politics of 1984 meet the naval warship backdrop of The Last Ship in fantasy master Glen Cook’s reissued first novel, available for the first time in decades.

Two hundred years after nuclear and chemical weapons have nearly annihilated the global population, the last of mankind struggles on in isolated communities. Law and order is carried out by the Political Office, black-clad police who rule through fear and violence, commanding the world’s survivors how to think, how to act, and when to obey the call to the Gathering: the ritual massing for war against an unknown and unseen Enemy.

Now the call has come, and all nations must pay tribute.

Kurt Ranke is a young man eking out an existence in the ruins of former Germany with his pregnant wife. But when the Gathering is called, he boards the decrepit destroyer Jäger—a once-mighty warship now more than two centuries old. Antiquated, broken-down, and running on steam, it wallows through uncharted waters carrying Ranke and a reluctant and ragtag group of soldiers en route to the Final Meeting: a battle from which it’s rumored none have ever returned . . .

Night Shade Books is proud to reissue, for the first time and now with a brand-new foreword from the author, The Heirs of Babylon, Glen Cook’s long-unavailable debut novel, a dark blend of post-apocalyptic naval warfare, Orwellian political intrigue, and the intimate, war-correspondent prose the author is known for.

Praise For The Heirs of Babylon…

Praise for The Heirs of Babylon

“A loving reissue . . . this early work is much more than a mere curiosity.”—B&N Sci-Fi and Fantasy Blog

Glen Cook is the author of dozens of novels of fantasy and science fiction, including The Black Company series, The Garrett Files, and The Tyranny of the Night. Cook was born in 1944 in New York City. He attended the Clarion Writers Workshop in 1970, where he met his wife, Carol.
Loading...
or
Not Currently Available for Direct Purchase