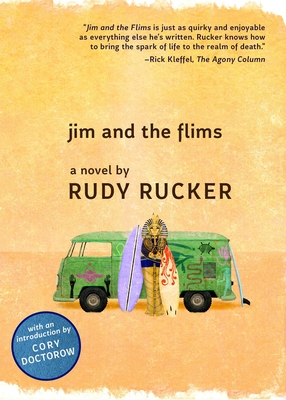 Jim and the Flims

“Jim and the Flims is just as quirky and enjoyable as everything else he’s written. Ricker knows how to bring the spark of life to the realm of death.” —Rick Kleffel, The Agony Column

A quantum experiment by disaffected bioengineer-turned-mailman Jim Oster has gone wrong, accidentally rupturing the membrane between our world and an afterworld called Flimsy—creating a two-way tunnel that kills his pregnant wife. Jim thinks life couldn’t get worse.

Until, that is, he realizes that he’s now facing an invasion of the Flims—subdimensional creatures who resemble blue baboons and flying beets—and that he may be the only one who can do anything about it. Aided by a posse of Santa Cruz surf-punks—one of whom keeps an Egyptian mummy in his basement, and may also be a serial killer—Jim plunges into a mad series of adventures in the afterworld—where he just might be able to find his wife and bring her back to life. . . .

Rudy Rucker is a writer and a mathematician who worked for twenty years as a Silicon Valley computer science professor. He is regarded as contemporary master of science-fiction, and received the Philip K. Dick award twice. His thirty published books include both novels and non-fiction books on the fourth dimension, infinity, and the meaning of computation. A founder of the cyberpunk school of science-fiction, Rucker also writes SF in a realistic style known as transrealism, often including himself as a character. He lives in the San Francisco Bay Area.
Loading...
or support indie stores by buying on