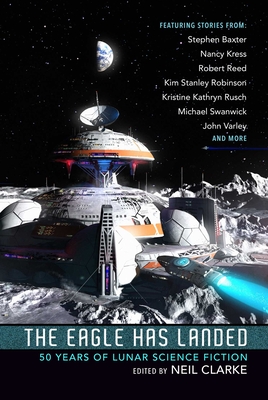 The Eagle Has Landed (Paperback)

When Apollo astronauts Neil Armstrong and Buzz Aldrin walked on the moon, itt was a giant leap for mankind and an inspiration to science fiction writers everywhere!

The lone survivor of a lunar crash, waiting for rescue in a solar powered suit, must keep walking for thirty days to remain in the sunlight keeping her alive . . . life as an ice miner turns ugly as the workers’ resentment turns from sabotage to murder . . . an astronaut investigating a strange crash landing encounters an increasing number of doppelgangers of herself . . . a nuclear bomb with a human personality announces to a moon colony that it will soon explode . . . hundreds of years in the future, art forgers working on the lunar surface travel back in time to swap out priceless art, rescuing it from what will become a destroyed Earth . . .

On July 20, 1969, mankind made what had only years earlier seemed like an impossible leap forward: Apollo 11 became the first manned mission to land on the moon, and Neil Armstrong the first person to step foot on the lunar surface. While there have only been a handful of new missions since, the fascination with our planet’s satellite continues, and generations of writers and artists have imagined the endless possibilities of lunar life.

The Eagle Has Landed collects the best stories written in the fifty years since mankind first stepped foot on the lunar surface, serving as a shining reminder that the moon is a visible and constant example of all the infinite possibility of the wider universe.

Neil Clarke is the editor of Clarkesworld and Forever Magazine and owner of Wyrm Publishing, and a six-time Hugo Award Nominee for Best Editor (short form). He currently lives in New Jersey with his wife and two children.

Praise For The Eagle Has Landed: 50 Years of Lunar Science Fiction…

Praise for The Eagle Has Landed

“This solid and well-rounded anthology is highly recommended.”—Booklist, starred review

“An eclectic selection of the past 50 years in lunar science fiction, written by a who’s who of speculative fiction writers . . . will appeal to fans of futuristic science fiction and historic space race aficionados.” —Publishers Weekly

“Brings together some of the best voices writing in the genre today. . . . a stunning collection of short fiction.”
—WorldsInInk on Galactic Empires
or support indie stores by buying on
Copyright © 2020 American Booksellers Association