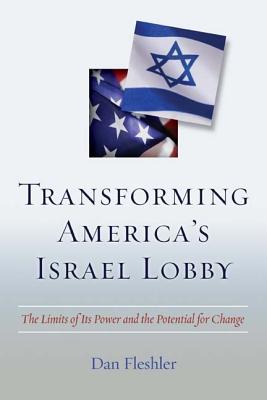 The Limits of Its Power and the Potential for Change

Does America’s “pro-Israel lobby,” including the legendary American Israel Public Affairs Committee (AIPAC), have as much power as is commonly believed? Does it have an unbreakable stranglehold on America’s Middle East policies? The answer is no, according to Dan Fleshler, an American Jewish activist who has worked within his community to try to counteract AIPAC and its allies. Written from the singular perch of a liberal American Jew who wants to create an alternative lobby in order to encourage more evenhanded U.S. policies in the Middle East, Fleshler’s new book, Transforming America’s Israel Lobby, sheds new light on how Israel’s American supporters exert their influence in Washington. With original research, it skewers myths propounded by the defenders of America’s mainstream, pro-Israel community as well as its detractors, notably John Mearsheimer and Stephen Walt. It demonstrates that much of AIPAC’s power is based on smoke and mirrors, on its ability to manage the perceptions of the political elite and promote exaggerated notions of its resources and clout. Having put AIPAC and its allies in proper perspective, the book provides the first detailed examination of the opportunities for—and obstacles to—creating a domestic political bloc that is pro-American, pro-Israeli and pro-Palestinian. It offers concrete, provocative suggestions to Americans—Jews and non-Jews alike—who want to embolden the U.S. government to disagree with Israel when necessary, and to press both Israelis and Palestinians to make the compromises required for peace. Why have American Jews, one of the most liberal communities in the United States, allowed hawks and neoconservatives to speak for them in Washington on matters related to Israel? Where have all the Jewish doves been hiding all of these years? Why didn’t more of them speak out against America’s invasion of Iraq? What can be done to mobilize Americans who believe that stopping both Israeli settlement expansion and Palestinian terrorism are vital American interests, and who want to give U.S. officials more political leeway to lean on both sides of the conflict, rather than just one side? Dan Fleshler, who has spent a quarter century as a consultant, board member and volunteer for a wide range of Jewish organizations, is in a unique position to answer these questions. He does so based on his own extensive experience in the American Jewish community, as well as interviews with Washington insiders, American Jewish leaders, Arab American and Christian church activists who focus on the Middle East, Israeli diplomats and politicians, and other experts. This book is a clarion call to “passionate moderates” who want to see an end to the Israeli occupation and who envision a viable Palestinian state; both goals can be achieved, according to Fleshler, via a robust American diplomacy that does not sell out the interests of either Israelis or Palestinians.

Praise For Transforming America's Israel Lobby: The Limits of Its Power and the Potential for Change…

"An extraordinarily frank, courageous, and truly illuminating book. It dispels many myths while frankly exploring some perennial dilemmas faced by peace-seeking American Jews, and outlines a pro-peace, pro-Israel, and pro-American road forward for them to take. A genuine tour de force!"—Sam Lewis, U.S. Ambassador to Israel under Presidents Jimmy Carter and Ronald Reagan

“This is a brilliant study of two intriguing contradictions pertaining to the story of America's Israel lobby. One is the contradiction between the reality and limits of Jewish power, on the one hand, and the popular perception of that power, on the other. Another has to do with the yawning gap between the Israel lobby's hawkish policies and the liberal views of the majority of American Jews. Fleshler's work is a timely reminder of the need for Israel's friends in America to focus their advocacy efforts on promoting one of Israel's most vital, indeed existential, interests: advancing a two-state solution to its conflict with the Palestinians.”—Shlomo Ben-Ami, former Israeli Foreign Minister, current Vice-President of the Toledo International Centre for Peace

“In the best tradition of the participant-observer, Dan Fleshler has written from the trenches where American Jews have been waging a struggle over the nature of and prospects for Arab-Israeli peace. Imbedded ideologues of the left and right are disarmed in his bold, original analysis and call to action. Readers who accompany Fleshler in his fascinating journey will discover the pragmatic idealism of an ethical, security-based dovishness that may yet help President Obama broker a secure peace between Israel and her Arab neighbors.”—Mark Rosenblum, Professor of History, Director of the Jewish Studies Program & Director of the Michael Harrington Center for Democratic Values and Social Change, Queens College, City University of NY

“This informed analysis points out that the ‘conventional Israel lobby’ does not speak for the American Jewish majority on U.S. policy toward the Israeli-Palestinian conflict, and does not promote the real interests of Israel or the United States. Dan Fleshler offers wise advice on how a dovish - but still too silent - majority of American Jews can strengthen the voice of progressive Jewish groups and encourage stronger U.S. leadership to help rescue Israel and America from a tragic conflict that gravely endangers our respective national interests.”—Philip C. Wilcox, Jr., President, Foundation for Middle East Peace and former Chief of Mission and U.S. Consul General in Jerusalem

"Fleshler, former media stategist for the Israel Policy Forum, offers a clear-eyed and dispassionate assessment of what he terms 'the conventional Israel lobby' and its real and imagined influence on Congress and the president."—Publishers Weekly