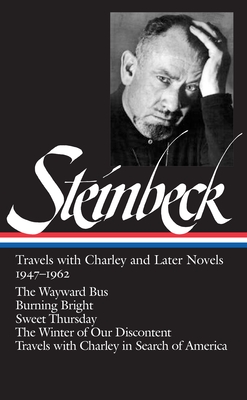 John Steinbeck was never content to repeat himself, and his restless search for new forms and fresh subject matter is fully evident in the books of his later years. This volume collects four novels that exhibit the full range of his gift, along with a travel book that has become one of his most enduringly popular works.

In The Wayward Bus (1947), Steinbeck leads a group of ill-matched passengers representing a spectrum of social types and classes, stranded by a washed-out bridge, on a circuitous journey that exposes cruelties, self-deceptions, and unsuspected moral strengths. The tone ranges from boisterous comedy to trenchant satirical observation of postwar America. Burning Bright (1950), an allegory set against shifting backgrounds (circus, sea, farm) and revolving around the fear of sterility and the desire for self-perpetuation, marks Steinbeck’s involvement with the drama in its fusion of the forms of novel and play.

Sweet Thursday (1954) marks Steinbeck’s return, in a mood of sometimes frothy comedy, to the characters and milieu of his earlier Cannery Row. A love story set against the background of the local brothel, the Bear Flag, Sweet Thursday is for all its intimations of melancholy one of the most lighthearted of Steinbeck’s books. It was subsequently adapted by Rodgers and Hammerstein into their musical Pipe Dream. Steinbeck’s final novel, The Winter of Our Discontent (1961) is set in an old Long Island whaling town modeled on Sag Harbor, where he had been spending time since 1953. The book breaks new ground in its depiction of the crass commercialism of contemporary America, and its impact on a protagonist with traditionalist values who is appalled but finally tempted by the encroaching sleaziness.

Travels with Charley in Search of America (1962) was Steinbeck’s last published book. A record of his experiences and observations as he drove around America in a pickup truck, accompanied by his standard poodle Charley, it is filled with engaging, often humorous description and comes to a powerful climax in an encounter with racist demonstrators in New Orleans.

The editors of this volume are Robert DeMott and Brian Railsback. Robert DeMott is the Edwin and Ruth Kennedy Distinguished Professor at Ohio University and the author of Steinbeck’s Typewriter, an award-winning book of critical essays. Brian Railsback is dean of the Honors College at Western Carolina University and the author of Parallel Expeditions: Charles Darwin and the Art of John Steinbeck.
Loading...
or support indie stores by buying on