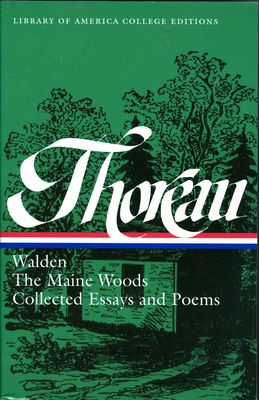 Here, in one volume for the first time, are the most important works of Henry David Thoreau, America's greatest nature writer and a political thinker of worldwide influence. A landmark in American literature, Walden is at once a personal declaration of independence, a social experiment, a manual of self-reliance, and a masterpiece of style. The Maine Woods combines close observation of the unexplored Maine wilderness with a far-sighted plea for conservation. Including "Civil Disobedience," "Walking," and "Life Without Principle," the 27 essays gathered here reflect Thoreau's speculative and probing cast of mind. In his poems, presented here in versions from his journals and manuscripts, Thoreau gave voice to his private sentiments and spiritual aspirations in the plain style of New England speech.

Henry David Thoreau was born in Concord, Massachusetts in 1817. He graduated from Harvard in 1837, the same year he began his lifelong Journal. Inspired by Ralph Waldo Emerson, Thoreau became a key member of the Transcendentalist movement that included Margaret Fuller and Bronson Alcott. The Transcendentalists' faith in nature was tested by Thoreau between 1845 and 1847 when he lived for twenty-six months in a homemade hut at Walden Pond. While living at Walden, Thoreau worked on the two books published during his lifetime: Walden (1854) and A Week on the Concord and Merrimack Rivers (1849). Several of his other works, including The Maine Woods, Cape Cod, and Excursions, were published posthumously. Thoreau died in Concord, at the age of forty-four, in 1862.
Loading...
or support indie stores by buying on