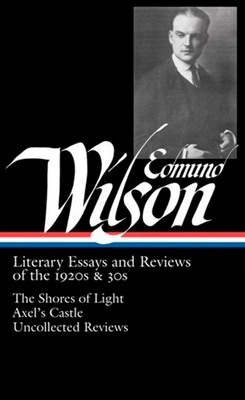 With this inaugural volume of what will be a series devoted to Edmund Wilson’s work, The Library of America pays tribute to the writer who first conceived the idea of a publishing series dedicated to “bringing out in a complete and compact form the principal American classics.” Literary Essays and Reviews of the 1920s and 30s presents Wilson in the extraordinary first phase of his career, participating in a cultural renaissance and grappling with the crucial issues of his era.

The Shores of Light (1952) is Wilson’s magisterial assemblage of early reviews, sketches, stories, memoirs, and other writings into a teeming panorama of America’s literary life in a period of exuberant expansion and in the years of political and economic strife that followed. Wilson traces the emergence of a new American writing as he reviews the work of Ernest Hemingway, Wallace Stevens, E. E. Cummings, John Dos Passos, Thornton Wilder, and many others, including his close friends F. Scott Fitzgerald and Edna St. Vincent Millay. Little escapes his notice: burlesque shows and Henry James, Soviet theater and the magic of Harry Houdini, the first novels of Malraux and the rediscovery of Edgar Allan Poe.

Axel’s Castle (1931), his pioneering overview of literary modernism, includes penetrating studies of Yeats, Eliot, Proust, Joyce, Gertrude Stein, and others. For several generations this book has stood as an indispensable companion to some of the crucial turning points in modern literature. Both these classic works display abundantly Wilson’s extraordinary erudition and unquenchable curiosity, his visionary grasp of larger historical meanings, his gift for acute psychological portraiture, and the matchless suppleness and lucidity of his prose. For Wilson, there are no minor subjects; every literary occasion sparks writing that is witty, energetic, and alive to the undercurrents of his time.

In addition this volume includes a number of uncollected reviews from the same period, including discussions of H. L. Mencken, Edith Wharton, and Bernard Shaw.

Edmund Wilson (1895-1972) was the leading literary critic of his generation. the author of such influential works as Axel's Castle, The Wound and the Bow, and Patriotic Gore.

Lewis M. Dabney (1932-2015) is the author of Edmund Wilson: A Life in Literature and the editor of Wilson’s last journal, The Sixties, and of Edmund Wilson: Centennial Reflections.
Loading...
or
Not Currently Available for Direct Purchase