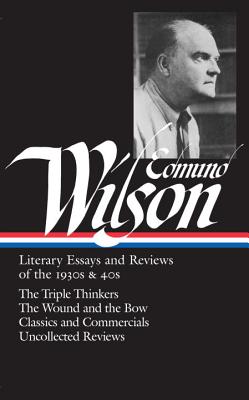 Literary Essays and Reviews of the 1930s & 40s (LOA #177): The Triple Thinkers / The Wound and the Bow / Classics and Commercials / Uncollected Reviews (Library of America Edmund Wilson Edition #2)

Edmund Wilson was the dominant American literary critic from the 1920s until his death in 1972, but he was also far more than that: a chronicler of his times, a historian of ideas, a probing observer of himself and of the society around him.

Literary Essays and Reviews of the 1930s and 40s shows Wilson at the midpoint of his extraordinary career as critic and scholar, and includes in complete form three of his most significant books. The Triple Thinkers (1938, revised 1948) and The Wound and the Bow (1941) give us Wilson at the height of his powers, in a series of extended literary studies marked by his unique combination of criticism, biographical narrative, and psychological analysis. Here are his dazzling portraits of Pushkin and Flaubert, Dickens and Henry James, Kipling and Casanova, equally sensitive to historical context and his subjects’ inner lives; his scintillating reader’s guide to the mysteries of Finnegans Wake and his celebrated exploration of the nature of creativity through the figure of Sophocles’ wounded hero Philoctetes.

Classics and Commercials (1950) is Wilson’s gathering of the best of his reviews from the 1940s, a collection that exemplifies the range and omnivorousness of his interests. In the exact and fluent prose that makes him an unfailing delight to read, Wilson takes on everything from Gogol and Tolstoy to contemporaries like James M. Cain, Katherine Anne Porter, Dorothy Parker, and William Faulkner. Whether registering his qualms about detective novels, parsing the etiquette manuals of Emily Post, or paying tribute to the comic genius of Evelyn Waugh, Wilson turns any critical occasion into the highest kind of pleasure.

The volume is completed with a selection of uncollected reviews from this period, including Wilson’s observations on the work of William Maxwell, Saul Bellow, and Anaïs Nin.

Edmund Wilson (1895-1972) was the leading literary critic of his generation. the author of such influential works as Axel's Castle, The Wound and the Bow, and Patriotic Gore.

Lewis M. Dabney (1932-2015) is the author of Edmund Wilson: A Life in Literature and the editor of Wilson’s last journal, The Sixties, and of Edmund Wilson: Centennial Reflections.
Loading...
or
Not Currently Available for Direct Purchase