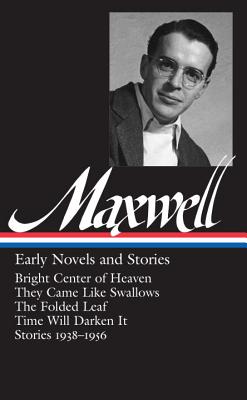 With his second book, They Came Like Swallows (1937), William Maxwell found his signature subject matter—the fragility of human happiness—as well as his voice, a quiet, cadenced Midwestern voice that John Updike has called one of the wisest and kindest in American fiction. Set against the background of the Spanish flu epidemic of 1918, this short novel presents the loving character of Elizabeth Morison, a devoted wife and mother, through the eyes of those whom she is fated to leave decades before her time.

Edmund Wilson described The Folded Leaf (1945) as “a quite unconventional study of adolescent relationships—between two boys, with a girl in the offing—in Chicago and in a Middle Western college: very much lived and very much seen.” He praised this “drama of the immature” for the compassion Maxwell brings to his male protagonists, whose intensely felt, unarticulated bond is beyond their inchoate ability to understand.

Time Will Darken It (1948) is a drama of the mature: a good man’s struggle to keep duty before desire and his family’s needs before his own. It paints a portrait of Draperville, Illinois, in 1912, a proud and isolated community governed by gossip, where an ambitious young woman must not overreach the limits society has placed on her sex, and an older, married gentleman must not encourage her should she dare.

Together with these major works, this Library of America edition of Maxwell’s early fiction collects his lighthearted first novel, Bright Center of Heaven (1934), out of print for nearly 70 years, and nine masterly short stories. It concludes with “The Writer as Illusionist” (1955), Maxwell’s fullest statement on the art of fiction as he practiced it.

“At last—at last!—The Library of America brings out a pair of volumes devoted to the writings of the New Yorker editor who in his spare time produced some of America’s most lyrical and poignant fiction.” —Arts Journal

Christopher Carduff is Books Editor of The Wall Street Journal and a former consulting editor at the Library of America. He is the editor of John Updike’s posthumous collections Higher Gossip: Essays and Criticism, Always Looking: Essays on Art, Selected Poems, and Collected Stories.
Loading...
or
Not Currently Available for Direct Purchase