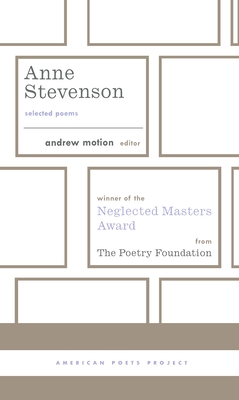 On October 3rd, 2007 Anne Stevenson was named the second recipient of the Poetry Foundation's Neglected Masters Award. The award brings renewed critical attention to the life's work of a significant but under-recognized American poet. The Library of America is proud to publish Anne Stevenson: Selected Poems, edited by English Poet Laureate Andrew Motion, in conjunction with the award. Stevenson was born in England of American parents in 1933, grew up and received her schooling in New England and in Ann Arbor, Michigan, and has spent most of her adult life in England. This is the first American edition of her work in more than a generation.

Andrew Motion, volume editor, is Professor Creative Writing at Royal Holloway College and served as England’s Poet Laureate from 1999 to 2009.
Loading...
or
Not Currently Available for Direct Purchase