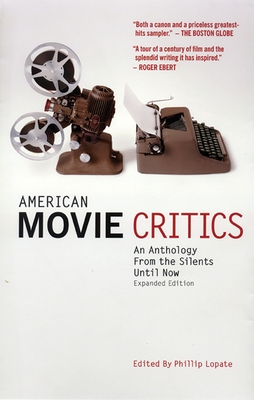 An Anthology from the Silents Until Now: A Library of America Special Publication

An anthology of unparalleled scope, American Movie Critics charts the rise of movies as art, industry, and mass entertainment. Here are the great movie critics who forged a forceful new vernacular idiom for talking about the new art,?Otis Ferguson, James Agee, Richard Schickel, Pauline Kael, Andrew Sarris, and Molly Haskell, among them. Here too are notable American writers, including Carl Sandburg, H. L. Mencken, Susan Sontag, and John Ashbery, weighing in on a range of cinematic experiences. The volume?s narrative continues to the present with a sampling of the best of today?s reviewers, including J. Hoberman, Roger Ebert, A. O. Scott, and Manohla Dargis. This paperback edition includes additional material reflecting the impact of the Internet and DVDs on film criticism.

Phillip Lopate, editor, is an essayist, novelist, and poet, whose books include Bachelorhood; Against Joie de Vivre; Portrait of My Body; and Waterfront: A Journey Around Manhattan. He has edited The Art of the Personal Essay and, for The Library of America, Writing New York: A Literary Anthology. His selected film criticism appeared in Totally Tenderly Tragically, and he currently serves on the selection committee of the New York Film Festival.
or
Buy Here
Copyright © 2020 American Booksellers Association