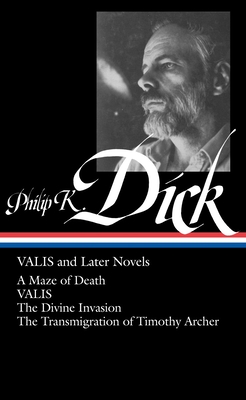 In 2007, Philip K. Dick: Four Novels of the 1960s became the fastest selling title in The Library of America's history. The 2008 companion volume, Five Novels of the1960s & 70s, broke series records for advance sales. Now comes a third and final volume gathering the best novels of Dick's final years, when religious revelation, always important in his work, became a dominant and irresistible theme.

In A Maze of Death (1970), a darkly speculative mystery that foreshadows Dick's final novels, colonists on the planet Delmak-O try to determine the nature of the God-or "Mentufacturer"-who plots their destiny. The late masterpiece VALIS (1981) is a novelistic reworking of "the events of 2-3-74," when Dick's life was transformed by what he believed was a mystical revelation. It is a harrowing self-portrait of a man torn between conflicting interpretations of what might be gnostic illumination or psychotic breakdown. The Divine Invasion (1981), a sequel to VALIS, is a powerful exploration of gnostic insight and its human consequences. The Transmigration of Timothy Archer (1982), Dick's last novel, is by turns theological thriller, roman à clef, and disenchanted portrait of late 1970s California life, based loosely on the controversial career of Bishop James Pike-a close friend and kindred spirit.

Jonathan Lethem is the author Fortress of Solitude and many other novels and story collections.
Loading...
or support indie stores by buying on