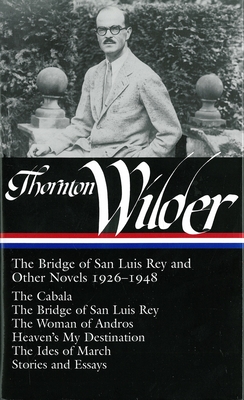 Thornton Wilder was the rare writer whose achievements as a playwright were matched by equal abilities as a novelist. As companion to its volume of Wilder's collected plays, The Library of America's edition of his early novels and stories brings together five novels that highlight his wit, erudition, innovative formal structures, and philosophical wisdom.

Drawing on the post-collegiate year he spent in Rome, Wilder fashioned in The Cabala a tale of youthful enchantment with the Eternal City in the form of a fictitious memoir of an American student and the enigmatic coterie of noble Romans who draw him into their midst. He followed this debut novel two years later with The Bridge of San Luis Rey, which catapulted him to literary prominence and earned him the first of his three Pulitzer prizes. Set in 18th-century Peru, the book is a kind of theological detective story concerning a friar's investigations into the lives of five individuals before they were killed in a bridge collapse. An elegantly told parable, with credible historical ambience and psychologically rounded characters, The Bridge of San Luis Rey is primarily a probing inquiry into the nature of destiny: Why did God allow these particular people to die?

The Woman of Andros, based on the Andria of Roman writer Terence, is a meditation on the ancient world filtered through the sensibility of a meditative courtesan; Heaven's My Destination, a departure from Wilder's historical themes, is a picaresque romp through Depression-era America; and The Ides of March takes up the story of Julius Caesar's assassination by imagining the exchange of letters among such prominent ancient figures as Catullus, Cleopatra, Cicero, and Caesar himself, "groping in the open seas of his unlimited power for the first principles which should guide him." The volume concludes with a selection of early short stories--among them "Précautions Inutiles," published here for the first time--and a selection of essays that offers Wilder's insights into the works of Stein and Joyce, as well as a lecture on letter writers that bears on both The Bridge of San Luis Rey and The Ides of March.

“Wilder is a novelist of morals. . . . They are answers found by individuals to the old problems of faith, hope, charity or love, art, duty, submission to one’s fate . . . and hence they are relatively universal; they can be illustrated from the lives of any individuals, in any place, at any time since the beginning of time. . . . The characters in Wilder’s novels and plays are looking for such answers.” —Malcolm Cowley