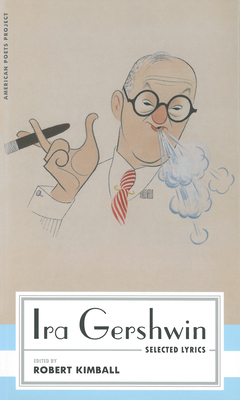 Ira Gershwin once remarked that he always tried to “capture the way people spoke to each other—their slang, their clichés, the catch phrases.” Few people in ordinary life, of course, can muster the humor, vivacity, and emotional directness that Gershwin brought to his lyrics. His collaboration with his brother George—one of the summits of American popular music—produced masterpieces that reflect, perhaps, the way people would like to talk. “Someone to Watch Over Me,” “Nice Work If You Can Get It,” “They Can’t Take That Away from Me,” “’S Wonderful”: these have entered the culture and become part of our common language. The insouciant, improvisational air of his lyrics belies the meticulous craftsmanship that Ira brought to every syllable. Robert Kimball has gathered more than 80 examples of Ira Gershwin at his best: the comic invention of songs such as “They All Laughed” and “Let’s Call the Whole Thing Off,” the poignancy of “The Man I Love,” the wry edge of “The Saga of Jenny,” the sheer exuberance of “Fascinating Rhythm,” and dozens more.

"Chock full of genius yet compact enough to slip in a pocket." —Playbill.com

Robert Kimball is a historian of the American musical theater whose books include The Gershwins (with Alfred Simon), Reminiscing with Sissle and Blake (with William Bolcom), Reading Lyrics (with Robert Gottlieb), and volumes devoted to the complete lyrics of Lorenz Hart, Ira Gershwin, Irving Berlin, and Frank Loesser. He edited Cole Porter: Selected Lyrics, also for the The Library of America’s American Poets Project.
Loading...
or
Not Currently Available for Direct Purchase