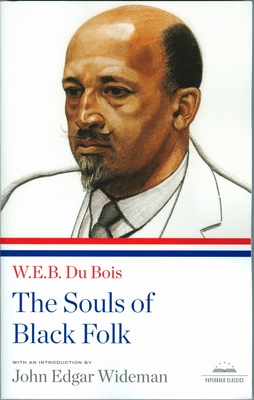 The Souls of Black Folk (Paperback)

?Few books make history and fewer still become foundational texts for the movements and struggles of an entire people. The Souls of Black Folk occupies this rare position.?
--Manning Marable

W.E.B. DuBois was the foremost black intellectual of his time. The Souls of Black Folk (1903), his most influential work, is a collection of fourteen beautifully written essays, by turns lyrical, historical, and autobiographical. Here, Du Bois records the cruelties of racism, celebrates the strength and pride of black America, and explores the paradoxical ?double-consciousness? of African-American life. ?The problem of the twentieth century is the problem of the color-line,? he writes, prophesying the struggle for freedom that became his life?s work.

The contents of this Paperback Classic are drawn from W.E.B. Du Bois: Writings, volume number 34 in the Library of America series; that volume also includes The Suppression of the African Slave-Trade, Dusk of Dawn, articles from The Crisis, and selected essays.

William Edward Burghardt Du Bois (1868-1963) was a historian, social scientist, journalist, and civil rights activist best known for his landmark 1903 book The Souls of Black Folk. He was a co-founder of the National Association for the Advancement of Colored People in 1909 and served for many years as the editor of its monthly magazine, The Crisis.

The first to win the International PEN/Faulkner Award twice, John Edgar Wideman has written a dozen novels, including Philadelphia Fire and Sent for You Yesterday, and a NBCC-nominated memoir, Brothers and Keepers. His second memoir, Fatheralong, was a finalist for the National Book Award.
or
Buy Here
Copyright © 2020 American Booksellers Association