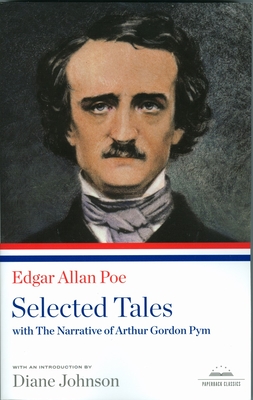 Selected Tales with The Narrative of Arthur Gordon Pym: A Library of America Paperback Classic

?In his stories of mystery and imagination Poe created a world-record for the English language: perhaps for all languages.?
--George Bernard Shaw

Read throughout the world, admired by writers as different as Dostoevsky and H.G. Wells, translated by Baudelaire, Edgar Allan Poe has become a legendary figure, representing the artist as obsessed outcast and romantic failure. His nightmarish visions, shaped by cool artistic calculation, reveal some of the dark possibilities of human experience. But his enormous popularity and his continuing influence on literature depend less on legend or vision than on his stylistic accomplishments as a writer. All of Poe?s best-known and most representative works are gathered here, as well as his masterly ?The Narrative of Arthur Gordon Pym.?

The contents of this Paperback Classic are drawn from Edgar Allan Poe: Poetry and Tales, volume number 19 in The Library of America series. It is joined in the series by a companion volume, number 20, Edgar Allan Poe: Essays and Reviews.

Novelist and essayist Diane Johnson is best known for her satirical novels L’Affaire and Le Divorce, which was a National Book Award finalist. She is a frequent contributor to The New York Review of Books.
Loading...
or
Not Currently Available for Direct Purchase