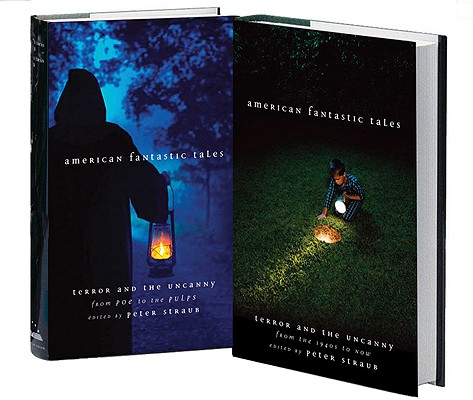 Terror and the Uncanny from Poe to Now: A Library of America Boxed Set

From its beginning, American literature teems with tales of horror, hauntings, terrifying obsessions and gruesome incursions, of the uncanny ways in which ordinary reality can be breached and subverted by the unknown and the irrational. In the tales of Irving, Poe, and Hawthorne, and their literary successors, the bright prospects of the New World face an uneasy reckoning with the forces of darkness. As this pathbreaking two-volume anthology demonstrates, it is a tradition with many unexpected detours and hidden chambers, and one that continues to evolve, finding new forms and new themes.

Peter Straub, a contemporary master of literary horror and fantasy, offers an authoritative and diverse gathering of stories calculated to unsettle and delight, in styles ranging from the exquisitely insinuating speculations of Henry James’s “The Jolly Corner” to the nightmarish post-apocalyptic savagery of Harlan Ellison’s “I Have No Mouth and I Must Scream.” Ghostly narratives of the Edwardian era, lurid classics from the pulp heyday of Weird Tales, latter-day masterpieces by Shirley Jackson, Ray Bradbury, Stephen King, Joyce Carol Oates, and Steven Millhauser: over 80 stories in all, with a generous selection of contemporary authors who continue to push the genre in new and startling directions.