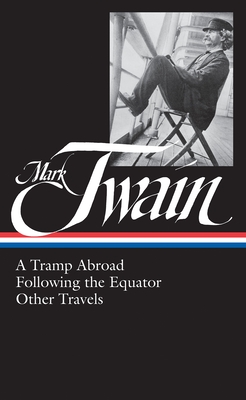 It was as a humorous travel writer, in The Innocents Abroad and Roughing It, that Mark Twain first became widely known, and at the height of his career he returned to the genre in the works collected here. Like those earlier books, the frequently hilarious A Tramp Abroad (1880)-based on his family's 16-month sojourn in Europe from April 1878 to August 1879-blends autobiography and fiction, facts and tall tales. Twain's send-up of Old World customs as well as his critical dissections of Wagnerian opera and the German language are often interlaced with American reminiscences, whether in the form of an extended discourse on the language of blue jays or the recollection of an elaborate practical joke in Hannibal, Missouri, involving a printer's devil and a skeleton. A Tramp Abroad is presented here with the author's original sketches.

Written at a time of financial trouble and personal loss (the death of the author's beloved daughter Susy), Following the Equator (1897) is a darker and more politicized account of a lecture tour around the world, with Fiji, Australia, New Zealand, Ceylon, India, Mauritius, and South Africa among the stop­overs. Using humorous but often biting anecdotes as well as keen journalist reporting, the book details bush life in Australia and the culture of the Maoris in New Zealand, while lashing out at social inequities such as the Indian caste system, and racist imperialism connected with European settlement and gold mining in southern Africa. Twain rounds out the volume with extensive historical accounts ranging from the Black Hole of Calcutta to the events in South Africa that would lead shortly to the Boer War.

This volume also includes 13 shorter pieces, most of them uncollected by the author, including a lengthy firsthand narrative of the shah of Persia's 1873 visit to London, an 1891 description of Richard Wagner's operas performed at Bayreuth, an 1897 account of Queen Victoria's jubilee in London, and an 1898 analysis of vitriolic Austrian parliamentary proceedings. The texts of several of these "other travels" are presented in newly corrected and fully restored versions.

Mark Twain was born Samuel Langhorne Clemens in Florida, Missouri, in 1835, and died at Redding, Connecticut in 1910. In his person and in his pursuits he was a man of extraordinary contrasts. Although he left school at twelve when his father died, he was eventually awarded honorary degrees from Yale University, the University of Missouri, and Oxford University. His career encompassed such varied occupations as printer, Mississippi riverboat pilot, journalist, travel writer, and publisher. He made fortunes from his writing but toward the end of his life he had to resort to lecture tours to pay his debts. He was hot-tempered, profane, and sentimental—and also pessimistic, cynical, and tortured by self-doubt. His nostalgia helped produce some of his best books. He lives in American letters as a great artist, the writer whom William Dean Howells called “the Lincoln of our literature.”
or support indie stores by buying on
Copyright © 2020 American Booksellers Association