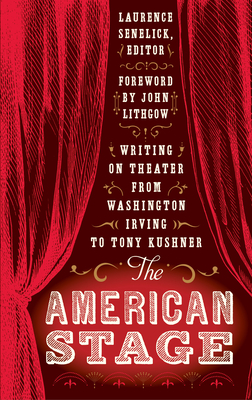 Writing on Theater from Washington Irving to Tony Kushner (LOA #203)

Drawing on history, criticism, memoir, fiction, poetry, and parody, editor Laurence Senelick presents writers with the special knack “to distill both the immediate experience and the recollected impression, to draw the reader into the charmed circle and conjure up what has already vanished.” Through the words of playwrights and critics, actors and directors, and others behind the footlights, the entertainments and high artistic strivings of successive eras come vividly, sometimes tumultuously, to life.

Praise For The American Stage: Writing on Theater from Washington Irving to Tony Kushner (LOA #203)…

“Even in a publishing series as uniformly superb as the invaluable Library of America, there are some books that stand out. This is, without question, one of the Library of America’s stellar contributions to American literature of the past few years—as well as one of the richest and most readable collections of writing on the American stage that you will ever come across.” —Buffalo News

Laurence Senelick is Fletcher Professor of Drama and Oratory at Tufts University and a recipient of the George Jean Nathan Prize for dramatic criticism. His award-winning books include The Age and Stage of George L. Fox; The Chekhov Theatre: A Century of the Plays in Performance; and The Changing Room: Sex, Drag and Theatre. He is also a professional actor, director, and translator who has staged a number of American premieres.
Loading...
or
Not Currently Available for Direct Purchase