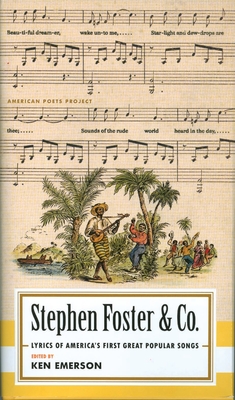 Stephen Foster is the trunk of the tree of American song. His blackface minstrel songs, including “Oh! Susanna,” “Old Folks at Home” (“Way down upon the Swanee River…”), and “My Old Kentucky Home,” and his parlor ballads, such as “Jeanie with the Light Brown Hair,” and “Beautiful Dreamer,” have inspired composers, songwriters, and performers from Charles Ives and George Gershwin to Ray Charles and James Taylor. Foster devoted as much care and craft to his lyrics as he did to his timeless melodies.

In this comprehensive new selection, acclaimed music historian Ken Emerson introduces and annotates the lyrics to more than thirty of Foster’s best and best-known songs. These masterpieces by America’s first full-time professional songwriter, forebear of Irving Berlin, Hoagy Carmichael, Carole King, and Bob Dylan, have been so deeply absorbed into our culture that they are often assumed to be folk music. Alongside are fifty other 19th-century American popular songs that influenced Foster or that he in turn influenced, from “Home! Sweet Home!” in the 1820s to “Western Home” (the original “Home on the Range”) in the 1870s.

“Pop-song scholar Emerson presents 81 such songs in their earliest incarnations in this neat collection, sorting them in categories that, used in their heyday, still make sense: Plantation Melodies, Parlor Songs, Drinking and Temperance Songs, Songs of Protest and Poverty, War Songs, and Comic Songs. . . . Essential Americana.”—Booklist

Ken Emerson is the author of Doo-Dah!: Stephen Foster and the Rise of American Popular Culture and Always Magic in the Air: The Bomp and Brilliance of the Brill Building Era.