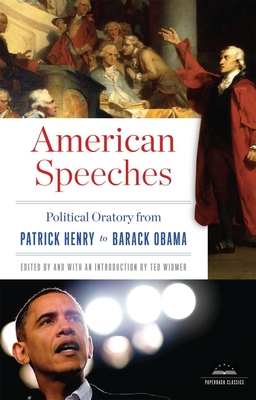 By Ted Widmer (Introduction by)

From the American Revolution to the present day, public oratory has profoundly shaped American history and culture-not only our politics but our language and our sense of national identity. Edited by historian and former presidential speechwriter Ted Widmer, American Speeches presents the complete texts of forty-seven of the greatest speeches in American history: from Patrick Henry's address before the Virginia Convention in 1775 ("give me liberty, or give me death!") to "A More Perfect Union," Barack Obama's profound meditation on race from the 2008 presidential campaign. Classic speeches like Sojourner Truth's stirring declamation to the 1851 Women's Rights Convention, Abraham Lincoln's masterpiece at Gettysburg, John F. Kennedy's still-inspiring inaugural address, Martin Luther King, Jr.'s prophetic "I Have a Dream" speech, and Ronald Reagan's clarion call at the Brandenburg Gate come together to form a dynamic portrait of our ongoing struggle to define and to realize the possibilities of the American experiment.
For almost thirty years, The Library of America has presented America's best and most significant writing in acclaimed hardcover editions. Now, a new series, Library of America Paperback Classics, offers attractive and affordable books that bring The Library of America's authoritative texts within easy reach of every reader. This book features detailed biographical notes about the speakers, an essay on the choice of the texts, and explanatory notes.

Ted Widmer, editor, is the Beatrice and Julio Mario Santo Domingo Director and Librarian of the John Carter Brown Library at Brown University and the author of Martin Van Buren in The American Presidents Series and of Young America: The Flowering of Democracy in New York City. He was director of speechwriting at the National Security Council and a senior advisor to President Clinton from 1997 to 2001.
or
Buy Here
(This book is on backorder)
Copyright © 2020 American Booksellers Association