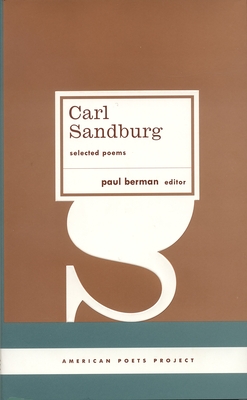 With the publication of Chicago Poems in 1916, Carl Sandburg became one of the most famous poets in America: the voice of a Midwestern literary revolt, fusing free-verse poetics with hard-edged journalistic observation and energetic, sometimes raucous protest.

By the time his first book appeared, Sandburg had been many things—a farm hand, a soldier in the Spanish-American War, an active Socialist, a newspaper reporter and movie reviewer—and he was determined to write poetry that would explode the genteel conventions of contemporary verse. His poems are populated by factory workers, washerwomen, crooked politicians, hobos, vaudeville dancers, and battle-scarred radicals. Writing from the bottom up, bringing to his poetry the immediacy of America’s streets and prairies, factories and jails, Sandburg forged a distinctive style at once lyrical and vernacular, by turns angry, gritty, funny, and tender.

Paul Berman takes a fresh look at Sandburg’s work and what it can tell us about twentieth-century America in a volume that draws on such volumes as Cornhuskers, Smoke and Steel, and Slabs of the Sunburnt West.

Paul Berman is a writer in residence at New York University and the author of several books, including The Flight of the Intellectuals. His essays on poets and poetry have appeared in The Nation, The New Republic, The New York Times Book Review, The New Yorker, Parnassus, and elsewhere.
Loading...
or
Not Currently Available for Direct Purchase