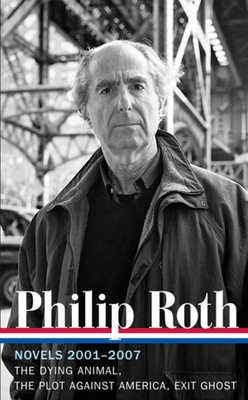 The definitive Philip Roth edition continues with three novels written in his late sixties and early seventies. The Dying Animal (2001) marks the final return of David Kepesh from The Breast (1972) and The Professor of Desire (1977). Now an eminent cultural critic in his sixties, Kepesh expertly seduces a beautiful twenty-four-year-old daughter of Cuban exiles only to find himself torn by sexual jealousy and the anguish of loss. As The Plot Against America (2004) begins, aviation hero Charles A. Lindbergh has defeated Franklin Roosevelt in the 1940 presidential election, and fear invades every Jewish household in America. Lindbergh has publicly blamed the Jews for pushing America toward a pointless war with Nazi Germany, and now in office, he negotiates a cordial “understanding” with Adolf Hitler. What follows for Jews during the Lindbergh presidency—most particularly in the Newark household of the boy Philip Roth—is the subject of an extraordinary work of historical imagination. With Exit Ghost (2007) Roth rings down the curtain on perhaps his greatest literary creation. Nathan Zuckerman returns to a radically changed New York, the city he left eleven years before, where a rash decision draws him into a vivid drama rife with implications for his future, and his past.

Philip Roth is the only living American novelist to have his work published in a comprehensive, definitive edition by The Library of America. He has received the Pulitzer Prize, the National Book Award and the National Book Critics Circle Award twice, the PEN/Faulkner Award three times, the National Medal of Arts, and the Gold Medal in Fiction, the highest award of the American Academy of Arts and Letters.

ROSS MILLER,editor, is Professor of English and Comparative Literature at the University of Connecticut and has taught at Yale, Wesleyan, and Trinity College. He is the author of American Apocalypse: The Great Fire and the Myth of Chicago and Here’s the Deal: The Buying and Selling of a Great American City.
or
Not Currently Available for Direct Purchase
Copyright © 2020 American Booksellers Association