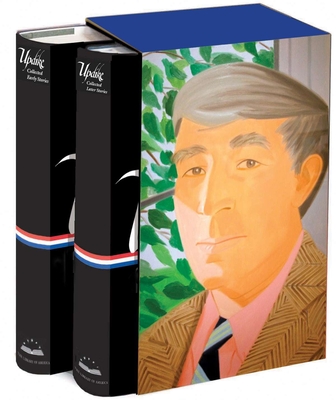 From his first collection, The Same Door, released in 1959, to his last, My Father’s Tears, published fifty years later, John Updike was America’s reigning master of the short story, “our second Hawthorne,” as Philip Roth described him. His evocations of small-town Pennsylvania life, and of his own religious, artistic, and sexual awakening, transfixed readers of The New Yorker and of the early collections Pigeon Feathers (1962) and The Music School (1966). In these and the works that followed—the formal experiments and wickedly tart tales of suburban adultery in Museums and Women (1972) and Problems (1979), the portraits of middle-aged couples in love and at war with aging parents and rebellious children in Trust Me (1987) and The Afterlife (1994), and the fugue-like stories of memory, desire, travel, and unquenched thirst for life in Licks of Love (2000) and My Father’s Tears (2009)—Updike displayed the virtuosic command of character, dialogue, and sensual description that was his signature.

Here, in two career-spanning volumes, are 186 unforgettable stories, from “Ace in the Hole” (1953), a sketch of a Rabbit-like ex-basketball player written when Updike was a Harvard senior, to “The Full Glass” (2008), the author’s “toast to the visible world, his own impending disappearance from it be damned.” Based on new archival research, each story is presented in its final definitive form and in order of composition, established here for the first time. This unprecedented collection of American masterpieces is not just the publishing event of the season, it is a national literary treasure.

Christopher Carduff is the editor of John Updike’s posthumous collections Higher Gossip: Essays and Criticism (2011) and Always Looking: Essays on Art (2012), and has been a consulting editor for The Library of America since 2006. He lives in Melrose, Massachusetts.
Loading...
or support indie stores by buying on