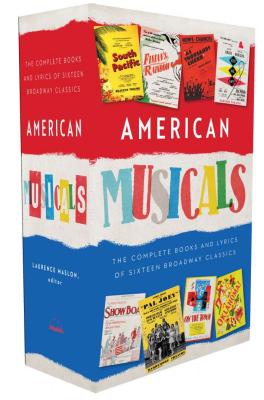 The Complete Books and Lyrics of Sixteen Broadway Classics: A Library of America Boxed Set

Including Oklahoma!, South Pacific, Guys and Dolls, Fiddler on the Roof, Cabaret, and 11 other great shows, this landmark collection is your ticket to the Golden Age of the Broadway musical: The Broadway musical is one of America’s great indigenous popular forms, a glorious hybrid that emerged “out of our speech, our tempo, our moral attitudes, our way of moving” (as Leonard Bernstein put it). Now in a landmark two-volume collection, The Library of America presents sixteen enduring masterpieces charting the Broadway musical’s narrative tradition from the groundbreaking Show Boat (1927) through the genre’s Golden Age to its response to the turbulent 1960s with the Tony Award–winning shows Cabaret and 1776. Based on new research, this historic collection presents the complete libretto of each musical in its Broadway opening night version, making these beloved stories available as never before. Irving Berlin and Moss Hart’s As Thousands Cheer is published here for the first time. Show Boat and Pal Joey are presented in newly restored versions. Seven other shows, including South Pacific, Guys and Dolls, and My Fair Lady, return to print for the first time in decades.

Each of these classic musicals has evolved over time, receiving many important revivals and new productions.  This Library of America boxed set offers readers unprecedented insight into this living history with a selection of hard-to-find or previously unpublished supplementary items, including lyrics of songs dropped out-of-town or added in later revivals. Lavishly illustrated­­ with 64 pages of photographs and other images drawn from the original productions, the set also contains biographical sketches of the book writers and lyricists; cast lists and other information about the shows’ Broadway openings; and detailed accounts of the path each show took on the road to Broadway. As a special feature, the box includes 16 full-color postcards reproducing the original show posters.

Kiss Me, Kate
Music and lyrics by Cole Porter · Book by Sam[uel] and Bella Spewack

Laurence Maslon is an arts professor in the Graduate Acting Program at New York University's Tisch School of the Arts. The author or editor of several books about musical theater, including The South Pacific Companion, he co-wrote two episodes of the Emmy-winning Broadway: The American Musical with Michael Kantor, as well as the companion volume. He also wrote the acclaimed American Masters/Thirteen documentary Richard Rodgers: The Sweetest Sounds. He lives in New York.

Praise For American Musicals: The Complete Books and Lyrics of Sixteen Broadway Classics: A Library of America Boxed Set…

"The Library of America's American Musicals will provide fans with hours of enjoyment." — Steven Suskin, PLAYBILL

"This handsome two-volume set . . . returns several major musicals to print for the first time in decades. . . . It is as valuable as it is purely enjoyable." — Charles Isherwood, The New York Times

"Handsomely packaged, with gorgeous production photos. . . . Maslon has chosen cannily. . . . These volumes are a charming and unexpected outgrowth of The Library of America's archives. For musical-theater buffs, they are indispensable." — Critics at Large