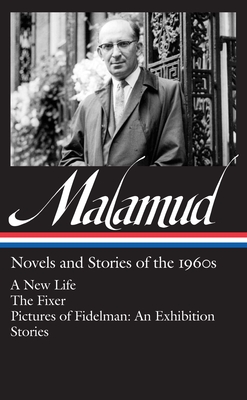 Novels & Stories of the 1960s (LOA #249): A New Life / The Fixer / Pictures of Fidelman: An Exhibition / stories (Library of America Bernard Malamud Edition #2)

Through his distinctive fusion of modernist daring and traditional storytelling, Bernard Malamud became one of postwar America’s most important writers, his work an inspiration for and lasting influence on novelists who have come after him, Cynthia Ozick and Philip Roth most notably among them. The second volume of the Library of America’s Malamud edition brings together three novels of the 1960s: A New Life (1961), a satiric campus novel set in the Pacific Northwest (based on the author’s experiences at Oregon State), in which native New Yorker Seymour Levin finds himself confronted not only with a new landscape but with erotic intrigue, university politics, and an appointment that isn’t quite what he had expected it to be. The Fixer (1966) is the gripping saga of a Jew imprisoned in prerevolutionary Russia after being falsely accused of the ritual murder of a twelve-year-old boy. The novel-instories Pictures of Fidelman: An Exhibition (1969) follows the comic misadventures, sexual and otherwise, of a failed American painter in Italy. In the ten unforgettable stories concluding the collection, Malamud shows himself to be an heir to the tradition of Hawthorne, Chekhov, and Kafka, and at his best— “Idiots First,” “The Jewbird,” “The German Refugee”— their equal.

PHILIP DAVIS is the author of the authorized and definitive biography Bernard Malamud: A Writer’s Life (2010). He is the editor of The Reader magazine and director of the Centre for Research into Reading, Information and Linguistic Systems at the University of Liverpool.
Loading...
or
Not Currently Available for Direct Purchase