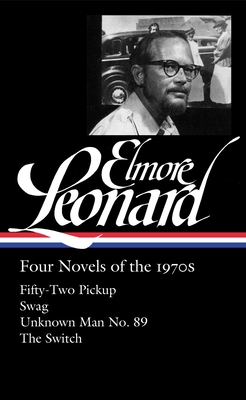 The Library of America inaugurates its Elmore Leonard edition with four funny, street-smart early masterpieces, gathered in one volume for the first time: Blending gritty toughness and unpredictable violence with wild humor and an uncanny ear for the rhythms of ordinary speech, Elmore Leonard (1925–2013) was the most widely and enthusiastically admired crime novelist of his time. His genius for scene and dialogue led Time magazine to describe him as “a Dickens of Detroit,” and Newsweek called him “the best American writer of crime alive, possibly the best we’ve ever had.” Now The Library of America inaugurates a three-volume edition of Leonard’s greatest work, prepared in consultation with the author shortly before his death and edited by his long-time researcher Gregg Sutter.

The four novels collected in this first volume re-invented the American crime novel and cemented Leonard’s reputation. All are set in his hometown Detroit, a hard-working “shot and a beer” kind of place whose lawless underside becomes a stage for an unforgettable cast of rogues, con artists, and psychopaths. Fifty-Two Pickup (1974), fast and sharply written, is an insidiously brutal book about an adulterous businessman who runs afoul of a crew of murderous blackmailers. Swag (1976) finds Leonard moving for the first time into the more comic mode that would become his signature, as he charts the small-time criminal careers of an amiable ex-con and an ambitious car salesman who share a bachelor pad and pursue their hedonistic dream of the good life through a string of armed robberies. Unknown Man No. 23 (1977) spins a complex web of crisscrossing rip-offs and con games, with process server Jack Ryan, a typically laid-back Leonard protagonist, caught in the middle. In The Switch (1978), one of Leonard’s funniest books, Mickey Dawson, a discontented housewife held for ransom, manages to turn the tables on her kidnappers while exacting overdue revenge on her scheming husband.

This volume also contains a newly researched chronology of Elmore Leonard’s life, drawing on materials in his personal archive, and detailed annotations, which include as a special bonus a scene from the typescript for Swag that did not appear in the published book.

"The new Library of America volume of four Elmore Leonard novels from the 1970s has a winner on just about every page." — Neely Tucker, The Washington Post

Detroit native GREGG SUTTER first met Elmore Leonard in 1979 and began working for him in 1981. He is currently at work on a biography of Leonard, from his unique perspective as his full-time researcher for more than thirty years.
Loading...
or support indie stores by buying on
(This book is on backorder)