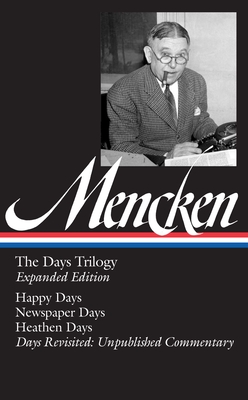 A major literary event: Mencken’s dazzling autobiography, with 200 pages of his own never-before-published commentary and photos. In 1936, at the age of fifty-five, H. L. Mencken published a reminiscence about his boyhood in The New Yorker, beginning a long and magnificent adventure in autobiography by America’s greatest journalist. Mencken went on to gather his childhood recollections in Happy Days (1940), a richly detailed, poignant account of growing up in Baltimore. A critical and popular success, the book surprised many with its glimpses of a less curmudgeonly Mencken, and there soon followed the absorbing sequels Newspaper Days (1941), charting his rise at the Baltimore Herald from cub reporter to editor, and Heathen Days (1943), recounting his varied excursions as journalist and public figure, including his coverage of the Scopes trial in 1925. But unknown to the legions of Days books’ admirers, Mencken continued to add to them after publication, annotating and expanding each volume in typescripts sealed to the public for twenty-five years after his death. Until now, most of this material—often more frank and unvarnished than the original Days books—has never been published. Containing nearly 200 pages of previously unseen writing, and illustrated with photographs from Mencken’s archives, many taken by Mencken himself, this expanded and definitive edition of the Days trilogy is a cause for celebration.

MARION ELIZABETH RODGERS is the author of Mencken: The American Iconoclast and editor of Mencken and Sara: A Life in Letters and The Impossible H. L. Mencken. She also edited The Library of America’s edition of Mencken’s Prejudices. She lives in Washington, D.C.
Loading...
or
Not Currently Available for Direct Purchase