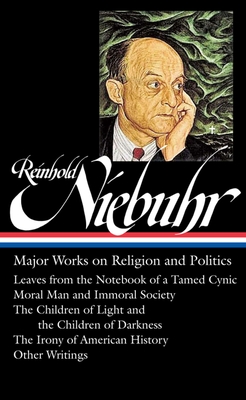 Major Works on Religion and Politics (LOA #263): Leaves from the Notebook of a Tamed Cynic / Moral Man and Immoral Society / The Children of Light and the Children of Darkness / The Irony of American History

“One of my favorite philosophers,” remarked Barack Obama about the theologian Reinhold Niebuhr (1892–1971) in 2007. President Obama is but one of the many American political leaders—including Jimmy Carter and Martin Luther King Jr.—to be influenced by Niebuhr’s writings. Throughout the Depression, World War II, and the Cold War, Niebuhr was one of the most prominent public voices of his time, probing with singular style the question of how to act morally in a fallen world.

This Library of America volume, prepared by Niebuhr’s daughter, is a collection of four indispensable books—Leaves from the Notebook of a Tamed Cynic (1929), Moral Man and Immoral Society (1932), The Children of Light and the Children of Darkness (1944), and The Irony of American History (1952)—and other essays, sermons, and lectures. Notable entries include Niebuhr's world-famous Serenity Prayer, plus his writings on Prohibition, the Allied bombing of Germany, apartheid in South Africa, and the Vietnam War—many of which are collected here for the first time.

Praise For Reinhold Niebuhr: Major Works on Religion and Politics (LOA #263): Leaves from the Notebook of a Tamed Cynic / Moral Man and Immoral Society / The Children of Light and the Children of Darkness / The Irony of American History…

“The indispensable Library of America, the most useful publishing venture in American letters, has produced an edition of Niebuhr’s major works, annotated by Niebuhr’s daughter, Elisabeth Sifton, a highly regarded editor and publisher.  It belongs in the library of every student of U. S. foreign policy." —Walter Russell Mead, Foreign Affairs

“Reading his work today, amid our own challenges of social inequality and imperial hubris, suggests we still need Niebuhr’s insight as much as ever.”—Adam Kirsch, The New York Review of Books

“A fine introduction to one of the 20th century’s most influential intellectuals.” —Barton Swaim, The Wall Street Journal

REINHOLD NIEBUHR (1892-1971) began his career as a young pastor in Detroit. By 1928, when he moved to New York City to take a position at the Union Theological Seminary, he was a committed pacifist, and ran for Congress in 1932 as a Socialist. Breaking with his pacifist and socialist associates shortly after the outbreak of World War II in Europe, he articulated a realist political philosophy that aligned with his ever-evolving theology. Niebuhr’s thinking has influenced American culture in profound ways, whether through the simple but powerful “Serenity Prayer” known to millions or via the influence of his writings on social and political figures such as Martin Luther King, Jr. and Barack Obama.

ELISABETH SIFTON, an editor and book publisher for forty years, is the author of The Serenity Prayer: Faith and Politics in Times of Peace and War. She lives in New York City and in Princeton, New Jersey.
Loading...
or
Not Currently Available for Direct Purchase