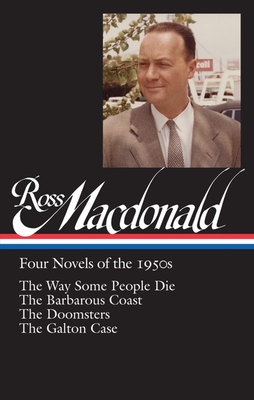 Four Novels of the 1950s (LOA #264): The Way Some People Die / The Barbarous Coast / The Doomsters / The Galton Case (Library of America Ross Macdonald Edition #1)

At last, the brilliant successor to Hammett and Chandler in a definitive collector’s edition: Revered by such contemporary masters as Sue Grafton, George Pelecanos, and James Ellroy, Ross Macdonald (the pseudonym of Kenneth Millar) brought to the crime novel new levels of social realism and psychological depth, while honing a unique gift for intricately involving mystery narratives. For his centennial year, The Library of America inaugurates its Macdonald edition with four novels from the 1950s, all featuring his incomparable protagonist, private investigator Lew Archer. Here are The Way Some People Die, a twisted journey through Los Angeles high and low, The Barbarous Coast, an exploration of crime and corruption in the movie business, The Doomsters, a breakthrough novel of madness and self-destruction, and The Galton Case, the mythically charged and deeply personal book that Macdonald considered a turning point in his career. As a special feature, this volume also includes five pieces in which Macdonald reveals the autobiographical background of his books and describes his distinctive approach to crime writing.

TOM NOLAN has been a freelance writer for many publications (including Rolling Stone, The Village Voice, The New York Times Book Review, and Oxford American) since age 18—and a Ross Macdonald reader since age 11. He is the author of Ross Macdonald: A Biography (1999) and editor of Ross Macdonald’s The Archer Files (2007).  He is also the author of Artie Shaw, King of the Clarinet (reissued 2011) and has been crime fiction reviewer for The Wall Street Journal since 1990. He lives in Burbank, California.