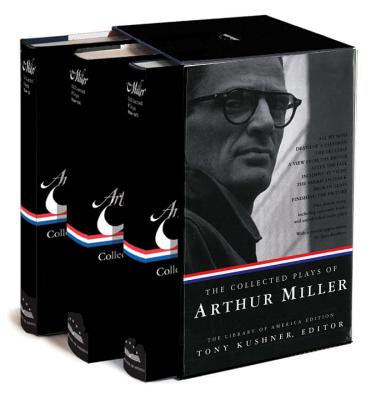 The Collected Plays of Arthur Miller

The ultimate gift for any theater lover: the essential American playwright in a three-volume deluxe collector's boxed set. Over the course of his nearly seventy-year career, Arthur Miller (1915–2005) reshaped and permanently expanded the range of the American theatre. Winner of the Pulitzer Prize and multiple Tony Awards, he crafted a body of work—searing, courageous, and profoundly honest—that forms an essential part of our national literature. Now, to celebrate his centennial, The Library of America and acclaimed playwright Tony Kushner present a definitive three-volume edition of Miller’s collected plays––all the works that established him as the indispensable voice of the twentieth century stage—in a deluxe boxed set. Here are All My Sons, Death of a Salesman, The Crucible, A View from the Bridge, After the Fall, Incident at Vichy, The American Clock, The Archbishop’s Ceiling, The Last Yankee, Broken Glass, Finishing the Picture, and many other works. Also included is Miller’s novella The Misfits, based on the screenplay he wrote for his wife, Marilyn Monroe, and Miller's incisive prose reflections on his art. As a special feature the boxed set reproduces Tony Kushner's memorable 2005 eulogy of Miller.

TONY KUSHNER, editor of The Library of America Arthur Miller Edition, is one of America’s most acclaimed playwrights. He has won the Pulitzer Prize for Drama (for Angels in America, Part One), an Emmy Award, two Tony Awards, three Obie Awards, and two Drama Desk Awards.
Loading...
or
Not Currently Available for Direct Purchase