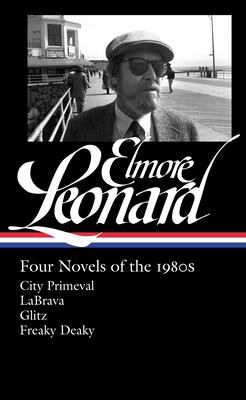 The definitive edition of America’s modern master of crime fiction continues with four classic novels widely considered his best, presented in one volume for the first time with behind-the-scenes accounts of their genesis by editor Gregg Sutter, Leonard’s longtime researcher, and rare archival material: a must for any fan.  It was during the 1980s that Elmore Leonard came into his own as the most popular and critically acclaimed crime writer in America. The four novels collected here show him at the top of his form, each in its own distinct way: City Primeval is a modern-day Western pitched on the border between law and lawlessness, with Detroit as the frontier; LaBrava, set in Miami, orchestrates a complex scheme involving a long-forgotten film noir actress and an ex-Secret Service man turned photographer; Glitz plunges into the seedy world of Atlantic City casinos and into the twisted mind of the unforgettable Teddy Magyk, one of Leonard’s most indelible bad guys; and Freaky Deaky sets in motion a tumultuous ’60s flashback, laced with harsh and outlandish comic touches, as a pair of morally dubious veterans of Ann Arbor revolutionary politics try out some new scams.

Detroit native Gregg Sutter first met Elmore Leonard in 1979 and began working for him in 1981. He is currently at work on a biography of Leonard, from his unique perspective as his full-time researcher for more than thirty years. He is the editor of The Library of America’s three-volume edition of Leonard’s novels.
Loading...
or support indie stores by buying on