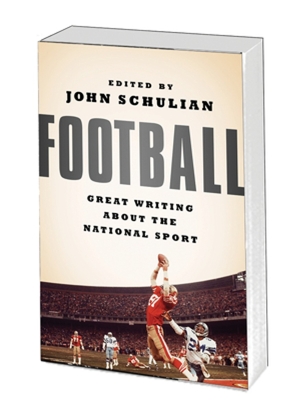 Great Writing About the National Sport

Now in paperback, the definitive anthology about the sport that dominates our culture.

Since football’s meteoric rise in the mid-twentieth century, the standout writers on the sport—an All-Pro line-up that includes Red Smith, Frank Deford, Jimmy Breslin, George Plimpton, Richard Price, Charles Pierce, Michael Lewis, and Roy Blount Jr—have gone behind and beyond the spectacle to reveal the complexity, the contradictions, and the deeper humanity at the heart of the game.

In this landmark collection, which the San Francisco Chronicle called “the finest football volume of all time” and Men’s Journal “the ultimate football reading list,” The Library of America and editor John Schulian bring together the very best of their work: gems of deadline reportage, incisive long-form profiles of football’s storied figures, and autobiographical accounts by players and others close to the game. Celebrating the sport without shying away from its sometimes devastating personal and social costs, the forty-four pieces gathered here testify to football’s boundless capacity to generate outsized characters and memorable tales. With a new preface by John Schulian.

Praise For Football: Great Writing About the National Sport…

"I'd take the over on this being the finest football volume of all time. . . . Nearly everything will knock you off the readerly line of scrimmage." — Colin Fleming, San Francisco Chronicle

"This fall's load of football books is better than most: livelier, lighter on the lap. Most centrally there is Football: Great Writing About the National Sport, edited by John Schulian. It's a necessary anthology, filling a gap as authoritatively as Red Grange did." — Dwight Garner, The New York Times

“Editor John Schulian and the Library of America have produced an exceptional collection. It has long been the accepted wisdom that boxing and baseball are the two sports most likely to be associated with great writing. This book demonstrates that like a lot of accepted wisdom, that contention bears reconsideration.” — Bill Littlefield, NPR's Only a Game

“A tribute to the sublime beauty and ugliness of our national obsession.” — Christine Smallwood, Harper's Magazine

"Mr. Schulian has collected 44 pieces of first-rate writing, from Jimmy Breslin on Y. A. Tittle to Michael Lewis on Adam Vinatieri. Football fans and fans of great writing will love it." — Wall Street Journal

"Schulian includes press box legends like Red Smith, Jimmy Cannon, and Dan Jenkins in the book, along with some less predictable choices like Fred Exley and Richard Price. All told, it's a memorable mosaic, right down to the final piece by Roy Blount Jr., who finds on a visit to the current Pittsburgh Steelers that you can't go home again." — Doug Moe, Wisconsin State Journal

"Editor John Schulian does not turn away from the dark side of football, but neither does he forget the joy, inspiration, and even the humor to be found in the game." — The Christian Science Monitor

"It's a powerful package. But what distinguishes it from the usual rah-rah collections that greet every new season in almost every sport, are its surprises." — Rick Kogan, Chicago Tribune

JOHN SCHULIAN  was a sports columnist for the Chicago Sun-Times and Philadelphia Daily News before moving to Hollywood, where he was, among other things, the co-creator of Xena: Warrior Princess. With George Kimball, he co-edited the Library of America anthology At the Fights. He is the author most recently of Sometimes They Even Shook Your Hand: Portraits of Champions Who Walked Among Us.
Loading...
or support indie stores by buying on