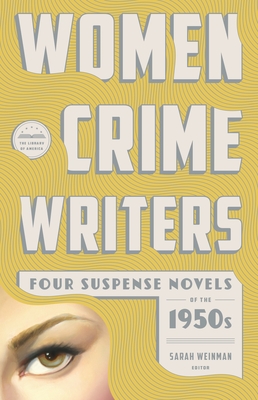 The Real Lolita author Sarah Wienman presents a landmark collection of 4 brilliant novels by the female pioneers of crime fiction—women who paved the way for Gillian Flynn, Tana French, and Lisa Scottoline

Though women crime and suspense writers dominate today’s bestseller lists, the extraordinary work of the mid-century pioneers of the genre is largely unknown. Turning in many cases from the mean streets of the hardboiled school to explore the anxieties and terrors lurking in everyday life, these groundbreaking novelists found the roots of fear and violence in a quiet suburban neighborhood, on a college campus, or in a comfortable midtown hotel. Their work, influential in its day and still vibrant and extraordinarily riveting today, is long overdue for rediscovery.

This volume, the second of a two-volume collector’s set, gathers four classic works that together reveal the vital and unacknowledged lineage to today’s leading crime writers. From the 1950s here are Charlotte Armstrong’s Mischief, the nightmarish drama of a child entrusted to a psychotic babysitter, Patricia Highsmith’s The Blunderer, brilliantly tracking the perverse parallel lives of two men driven toward murder, Margaret Millar’s Beast in View, a relentless study in madness, and Dolores Hitchens’s Fools' Gold, a hard-edged tale of robbery and redemption.

Sarah Weinman is widely recognized as a leading authority on crime fiction. She is the editor of Troubled Daughters, Twisted Wives: Stories from the Trailblazers of Domestic Suspense (Penguin, 2013), which the Los Angeles Review of Books called “simply one of the most significant anthologies of crime fiction, ever.” She is the news editor for Publishers Marketplace and her work has appeared in the New York Times, Wall Street Journal, the National Post, the Los Angeles Times, and the Washington Post, among other publications. Her long-running (but now on hiatus) blog, Confessions of an Idiosyncratic Mind, was hailed by USA TODAY as “a respected resource for commentary on crime fiction.” Weinman lives in Brooklyn, New York.
Loading...
or
Not Currently Available for Direct Purchase